We went to the Osa Peninsula to experience part of the projects of the Caminos de Osa Association, while here we met some incredibly inspiring people, who do not stop at anything and who work hard to support the conservation generating positive impact on society and the environment.

How to get there?
You have to get to Puerto Jiménez, either by air (Sansa) or by car on the Interamerican Highway after Palmar at the gas station on the right.

Distance:It varies depending on the activity.

Cost:Varies depending on the tour

We arrived in Puerto Jiménez flying with Sansa airlines … I mean we left at 6 am and at 7 we were already in Osa! The flight was good, no turbulence at all and the view simply spectacular until landing. When we arrived Pablo received us who is in charge of Caminos de Osa and we left the area of ​​La Palma to have breakfast of champions and head off to our first activity. 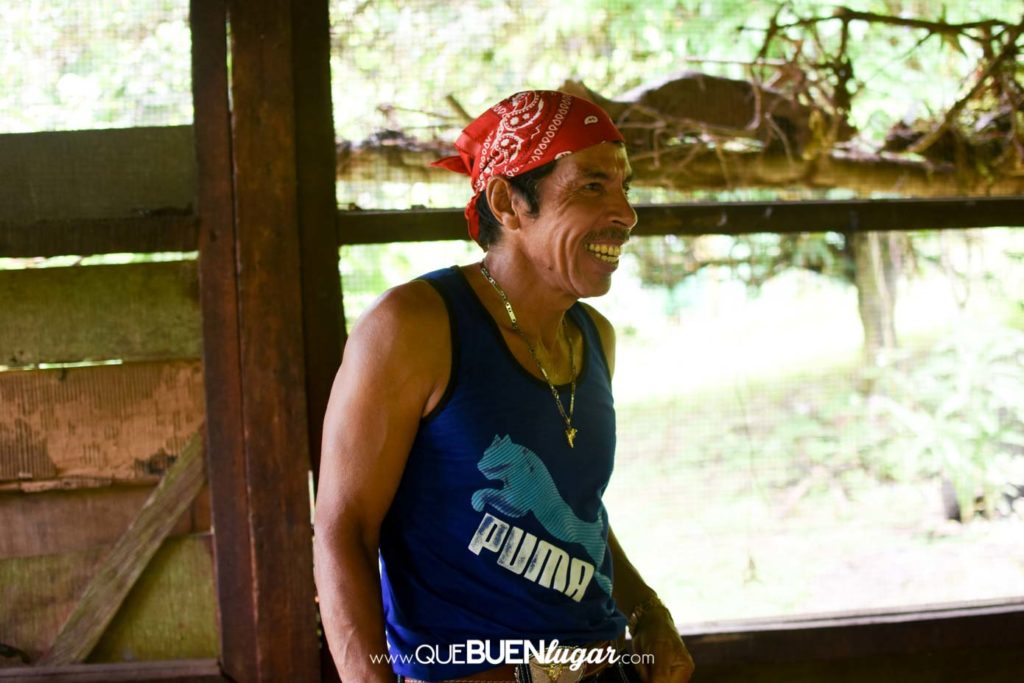 Gold Tour
We left for Rancho Quemado (Burned ranch) until we arrived at Juan’s house where he met us with his family dressed as a cowboy in a ranch where he gave an introductory talk to his visitors.
After introducing himself, he told us his story of how he got gold for a lot of years, and then how he turned his lifestyle in favour of conservation and started an exemplary project, after a while, we went to walk upriver in his farm to learn the artisan technique and we even took out a couple of gold granites. Then we went back to the ranch where they gave us a delicious fresh Orange juice with homemade bread with mango jelly that we loved. 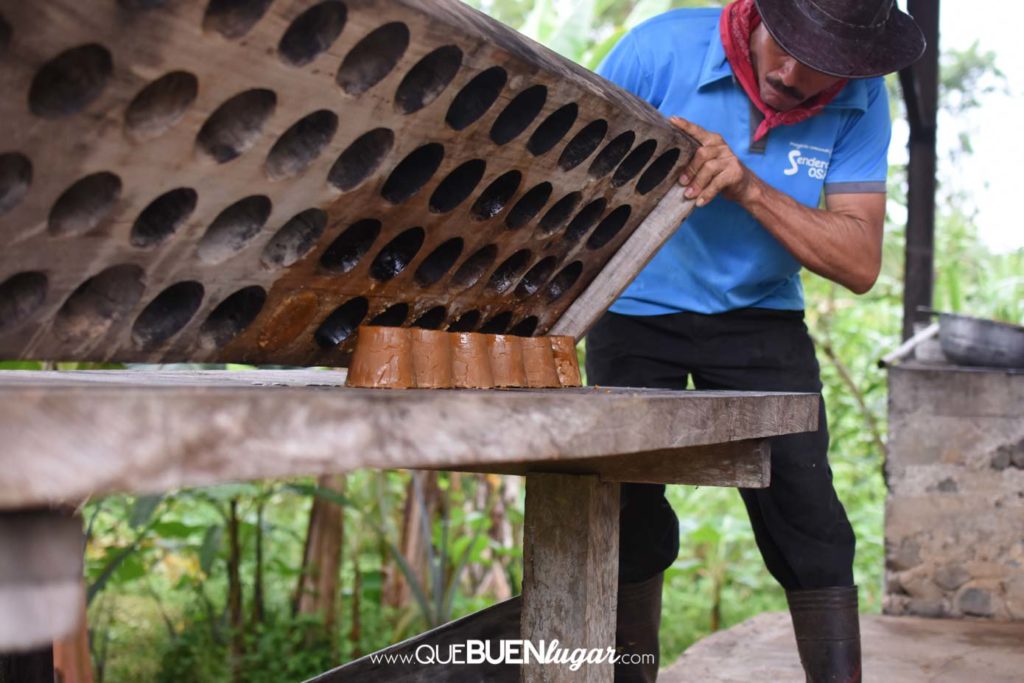 Mill Don Carmen
We left Juan’s place and went to Don Johnny right there in Rancho Quemado to get to know his project. When we arrived, Don Johnny’s father was throwing firewood at the stove and he explained how sugarcane juice turns into various products. While stirring the boiling liquid in a pot with a stick we told us his story, about his family and his dream of having a mill.

Then when it was the right time he took all the sweet to make a confection of thickened syrup which can be eaten like candy, the process is super fast and any mistake can damage the production of your product. We also had a taste of their sweet honey, which sells to hotels to sweeten drinks without using artificial sweeteners.
After eating sugar in all their presentations they brought us lunch right here, his wife and daughters helped prepare the food that was delicious and gave us strength for the tour that followed. 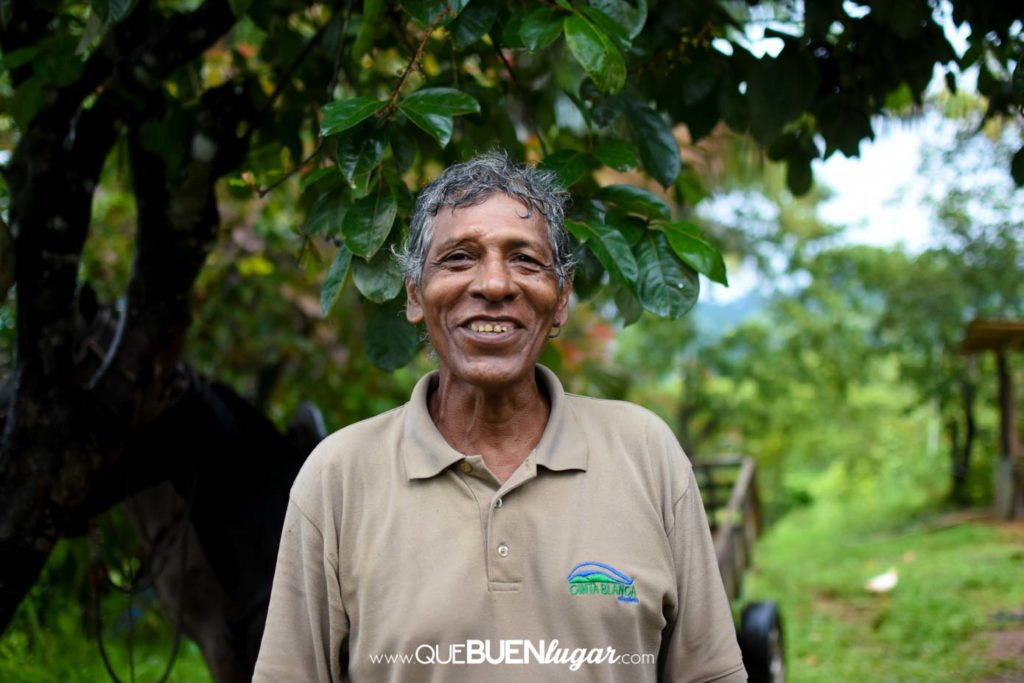 Horseback Riding Cinta Blanca
To get to ‘Cinta Blanca’ we had to go down the street that goes to Drake, we crossed a mountain with a bit of mud and after a couple of rivers (a little grown by the rain), we arrived at Mister Felipe’s house. The rain was not an obstacle to ride our horses and had a great time on a tour that began between farms and that little by little went into the forest that borders Corcovado National Park.
On the way, Felipe told us about his project and how he also strives to show his visitors about the beauty found in this small town. When we approached the forest, the farm ended up becoming a path where we left the horses and walked about 400m to the waterfall of Cinta Blanca. The waterfalls are super cool, there is a jungle that protects the lovely river and the incredible thing is that in a matter of 400 meters we go from being in the middle of farms to being surrounded by dense nature.
After returning on horseback to Felipe’s farm we went to look for our lodging in Rancho Quemado called Rancho Verde. 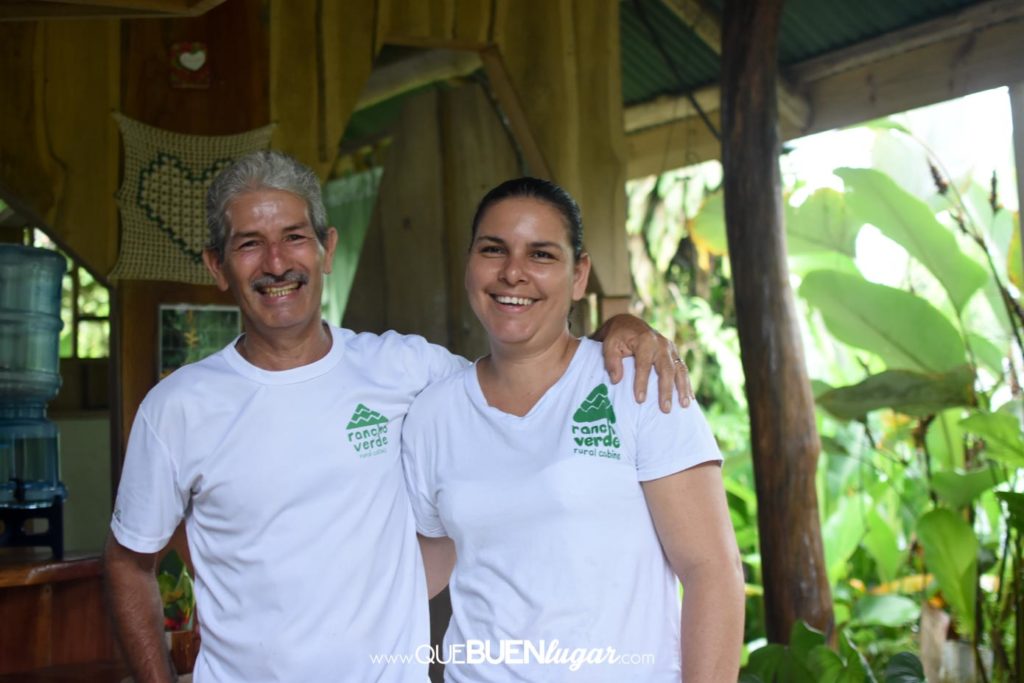 Rancho Verde
Rancho Verde is also part of the Caminos de Osa ventures, and it is a very nice place in the middle of Rancho Quemado where we spent the night. The place has several rooms and also has a restaurant so we had a delicious dinner before going to sleep in our rooms. We spent the night accompanied by the sound of rain and the next morning it was still raining so we couldn’t go as early as anticipated. 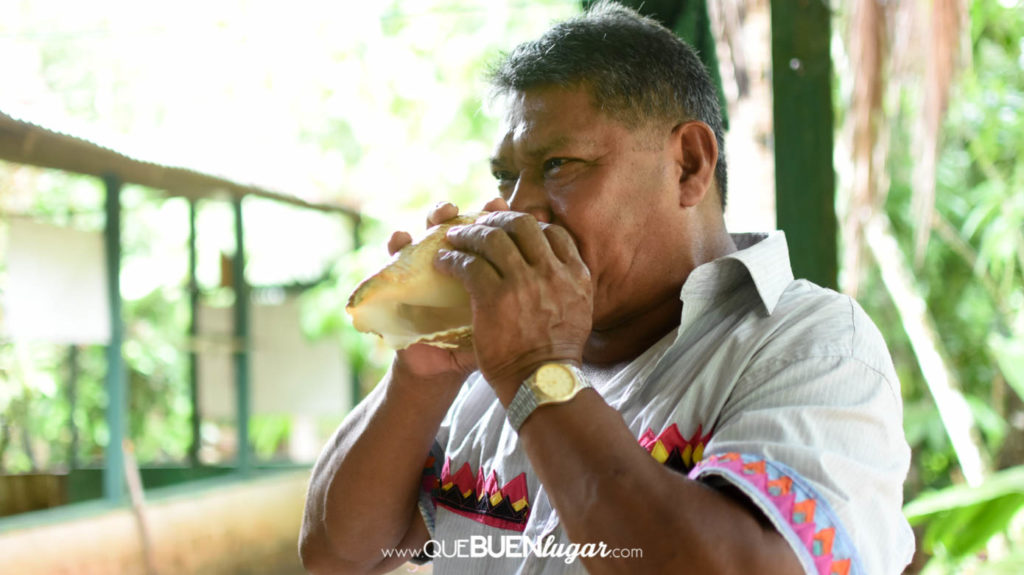 Cultural Tour indígena Gnöbe
We left for Aguas Ricas, for this we had to travel by car for almost an hour, passing through La Palma until we reached the Mariano estate. When we arrived at the entrance they welcomed us with a bonfire where they burned an ants nest in order to clean our spirits in order to enter their house. Once inside we met Mariano’s family and began the tour with a summary of indigenous ancestral stories, during this time we played instruments and danced to the rhythm of the music he taught us.
Then we went to tour 1 of the trails, where we learned about medicinal plants, trees, how to peel rice and grind corn in an artisanal way as they did years ago. 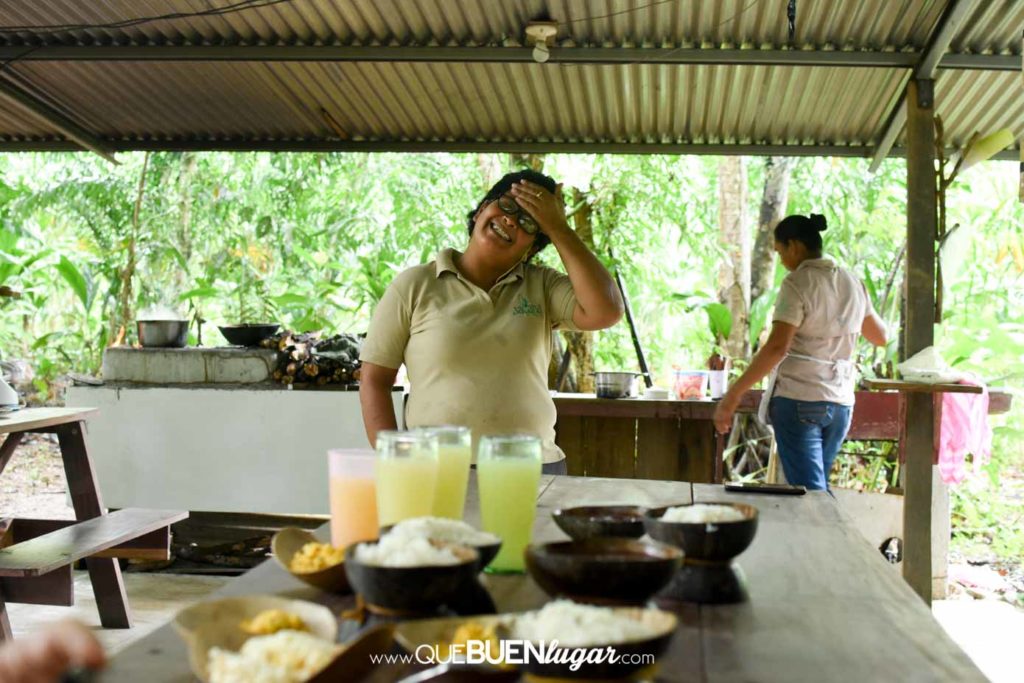 Heart of palm Jacaranda Tour
After learning about the indigenous culture we went to Eida for lunch and then the tour began. Eida is another entrepreneur of Caminos de Osa, she lived up to 12 years in Corcovado National Park and maybe one of the few people who really know their way around, she’s also taken courses which have given her a lot of biological knowledge and shares her knowledge in plants and insects as part of the tour. After a little walking between the palm hearts trees, it was time to see how they cut the palm hearts and then taste it without cooking … and it was something else. 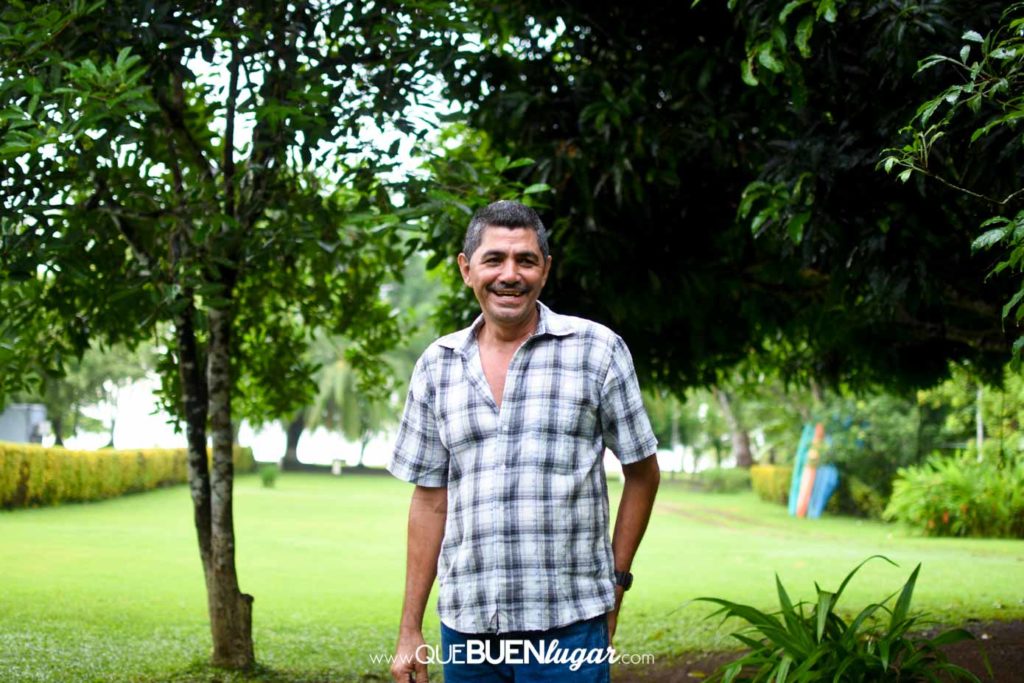 Lapamar lodging and kayaking
To finish our tour in the area we went to Playa Blanca to see another venture that is also part of Caminos de Osa, to kayak at sunset. This place is close to La Palma, and it is a beach within the Golfo Dulce with calm waters so the kayak is perfect and you can paddle wherever and have an awesome experience.

After the kayak we went to bathe after 2 long days, then we ate fried plantains with fish that was also delicious and then we went to sleep since we had to get up early to return to San José on Monday morning.